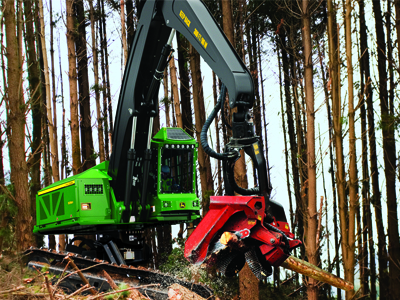 To ensure a sustainable continuance of Oregon's private forests, there are state laws that govern forest resource protection and land use. Over the last 70 years, the regulations surrounding the growth and harvest of trees associated with sustainable forestry have moved into the limelight. The state of Oregon has strict laws, several of which have been around since 1941 and have been consistently developed and updated by scientists, state agencies, landowners, and other key groups.

The Oregon Forest Practices Act, created in 1971, ensures the protection of Oregon's natural resources including forests, soil, air, water, fish, and wildlife. The Act is approximately 75 pages long and contains an in-depth series of rules and regulations related to commercial logging. Here are a few of the key elements:

Planning: At least 15 days prior to forest management operations, you have to fulfill some administrative responsibilities at your local Oregon Department of Forestry office first. Keep in mind, some activities and locations, including prescribed burns, chemical application, and power-driven machinery operations, require extra paperwork.

Harvesting: No more than 120 acres under single ownership can be clear cut at a given time.

Water Protection: A buffer should be created along streams, wetlands, and lakes to safeguard wildlife. Within that protected zone, no harvesting, road building or chemical usage is permitted.

Wildlife Protection: To preserve threatened or endangered species forestry practices are limited during certain seasons. Operations are restricted during the following periods:

? March 1 to September 31 - Harvesting is not allowed at all within a 70 acre area identified as a Northern Spotted Owl habitat and nearby harvesting that might disturb these owls should be limited.

? February 15 to July 31 - Harvesting is not allowed within one-quarter mile of the active Great Blue Heron nest trees.

? March 1 to September 15 - Harvesting is not allowed within 600 feet of the active Osprey nest tree or perch trees.

Reforestation: Proceeding a removal of the forest canopy via regeneration harvesting, landowners must successfully reforest forestlands within two years. Inside of six years following harvest, there must be enough healthy young trees that are well-distributed and “free-to-grow” into a new forest.

Compliance and Penalties
Generally speaking, when logging companies or landowners break laws or fail to comply with rules under the Oregon Forest Practices Act, the Oregon Department of Forestry (ODF) requires them to repair any associated damages and pay a fine. The fines are capped at $5,000 per violation.

Note: If you’re a forest landowner, keep in mind that the sale and exchange of land is a buyer-beware situation in the state of Oregon and that, while numerous contractual violations can occur, the Oregon Department of Forestry cannot legally get involved with land-sale disputes. For more information, take a look at the Oregon Forest Practices Act Rulebook orcontact us at Papé and have all your sustainable forestry questions answered by the experts.

Section 179 of the Federal Tax Code has been extended and expanded to allow deduction of the full purchase price of qualifying equipment and/or software, along with doubling the Bonus Depreciation for even more savings. This tax break is only guaranteed through 2018, so take advantage of it now, before it potentially disappears.

THE PROS & CONS OF CUT-TO-LENGTH LOGGING

Cut-to-Length (CTL) logging is a popular alternative to traditional harvesting methods. If your logging company is considering moving toward cut-to-length harvesting methods, make sure you understand the pros and cons.